Tottenham Hotspur take on Aston Villa this weekend in the Premier League as they finally play out their game-in-hand on many of their rivals.

A win against Villa would thrust Spurs right back into the race for the top four, while a defeat would arguably end their chances of Champions League football next season.

We believe that Hugo Lloris will start between the sticks again, with Mourinho also sticking with his usual Premier League central defensive duo of Alderweireld and Sanchez.

Sergio Reguilon returns to the left-back slot while Mourinho continues to put faith in Matt Doherty over Serge Aurier in the league, as much as I would love to see Tanganga there.

With Son out injured, Harry Winks comes into the midfield alongside Pierre-Emile Hojbjerg to allow Tanguy Ndombele to push forward into the number ten role. A start comes a little too soon for Giovani Lo Celso.

Lucas Moura is pushed out wide left into Son’s position while Gareth Bale and Harry Kane line up as usual. 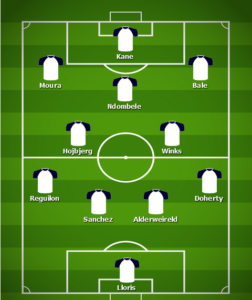 Alasdair Gold names four centre-backs aside from Romero who Spurs could...