Tottenham Hotspur take on Arsenal in the latest North London Derby at the Emirates Stadium this weekend, with bragging rights on the line for the fierce rivals.

We believe that Jose Mourinho will name Hugo Lloris between the sticks, while sticking with the central defensive partnership of Toby Alderweireld and Davinson Sanchez.

While Matt Doherty has improved over recent weeks, after Serge Aurier’s performance against Dinamo Zagreb in midweek, we think that the Ivorian will get the nod at right-back.

Meanwhile, Sergio Reguilon comes back into the XI to give Spurs some pace, energy and width on that left-hand side.

Pierre-Emile Hojbjerg and Tanguy Ndombele continue to partner each other in the centre of the pitch, providing a combination of solidity and creativity.

Lucas Moura gets the nod in the number 10 role over the likes of Erik Lamela and Dele Alli, while Gareth Bale also comes back into the starting XI. Heung-min Son and Harry Kane lead the attack as normal. 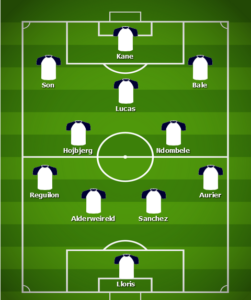 Report: Pochettino has spoken to Tottenham star about his future