Tottenham Hotspur are back in action away to Burnley in the Carabao Cup this midweek as they look to bounce back from that disappointing West Ham defeat.

After splitting the squad in half last week, we expect Nuno to bring them back together in a mixed starting XI this time around.

Pierluigi Gollini is given a chance between the sticks, with Hugo Lloris dropping to the bench.

The back four is the same one that lined up against Vitesse Arnhem in the Conference League, made up of Ben Davies, Joe Rodon, Davinson Sanchez and Japhet Tanganga.

In midfield, Pierre-Emile Hojbjerg is partnered by Harry Winks, with Oliver Skipp given a rest. Tanguy Ndombele sits out to give Giovani Lo Celso a chance in the number 10 role.

Lucas Moura is also rested to give Steven Bergwijn a chance back in the side, while Harry Kane and Heung-min Son both retain their positions in search of some Spurs form. 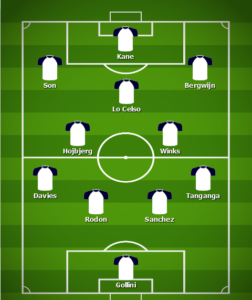 Report: Recently departed Spurs man goes under the knife after picking up injury

Report: Spurs move up into fifth with 3-0 win over Norwich

Report: Spurs move up into fifth with 3-0 win over Norwich

‘Not having a good game’ – Lord Sugar criticises Spurs star...

Antonio Conte on why Tottenham fans singing his name was ‘too...