Tottenham Hotspur take on Eintracht Frankfurt in the Champions League this evening as they look to bounce back from their 3-1 defeat to Arsenal.

We believe that Conte will stick with his tried-and-tested 3-4-3 formation once again, although he may be tempted to deploy a 3-5-2 against Brighton.

Hugo Lloris remains between the sticks despite his blunder in the North London Derby, while Emerson Royal keeps his place considering he will be banned for future Premier League games.

Eric Dier, Clement Lenglet, and Ivan Perisic also remain in the starting XI for the Italian, while Davinson Sanchez rotates in to give Cristian Romero a rest.

The usual duo of Pierre-Emile Hojbjerg and Rodrigo Bentancur line up in the centre of the park, with Conte also naming the same front three of Harry Kane, Heung-min Son and Richarlison, with Dejan Kulusevski and Lucas Moura both still injured.

However, Yves Bissouma remains an option to bolster the midfield ranks and switch the formation into a 3-5-2 if needed.

What Tottenham XI would you select? 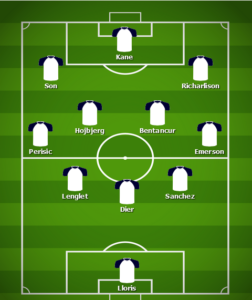