Tottenham Hotspur take on Fulham in a Premier League London derby on Wednesday, with the Lilywhites in desperate need of a win and three points.

We believe that Hugo Lloris will remain between the sticks for Jose Mourinho’s team, although there will be personnel and formation changes in the back line.

Toby Alderweireld and Serge Aurier return, while Eric Dier and Sergio Reguilon retain their starting spots, this time in a back four rather than a back five.

Moussa Sissoko also returns to the line-up to replace Harry Winks, partnering the everpresent Pierre-Emile Hojbjerg in the centre of the pitch.

Tanguy Ndombele starts again after his impressive 70 minutes against Wolves on Sunday, in which he scored within one minute of the match starting.

Heung-min Son and Harry Kane remain up front, with Steven Bergwijn coming in to add some pace in behind. 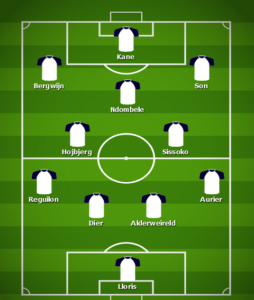