Tottenham Hotspur take on Fulham in a rescheduled fixture tomorrow night and we believe that Jose Mourinho will make ten changes from his Marine FC line-up.

Hugo Lloris returns to the starting line-up after setting out the FA Cup clash, while Toby Alderweireld is the only player in the squad to start both games.

Eric Dier comes back in to partner Toby, with Serge Aurier and Sergio Reguilon lining up at right and left-back respectively.

Pierre-Emile Hojbjerg returns to the team after coming off early against Brentford with that nasty shin injury, while Winks retains his Premier League spot for the third game in a row. Moussa Sissoko drops down to the bench.

Tanguy Ndombele occupies the creative midfielder role, with Dele Alli serving as the other option on the bench.

Heung-min Son and Steven Bergwijn are named on either wing, with Harry Kane returning up front after his day off against Marine. 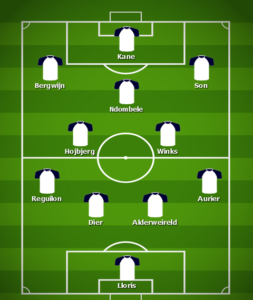 ‘Absolute senseless signing’- Some fans are against Spurs making a move...