Tottenham Hotspur welcome Leicester City to North London this weekend in the Premier League as they look to extend their unbeaten run in the competition.

As always, we believe that club captain Hugo Lloris will remain between the sticks for Spurs, with Eric Dier and Cristian Romero also retaining their places.

With Spurs perhaps expected the have the majority of the ball, such is Leicester’s current form, Clement Lenglet comes in at left-centre-back for his passing ability.

At wing-back, Ryan Sessegnon rotates in to give Ivan Perisic a rest, and Emerson Royal starts on the right – although it is possible we could see the Croatian pop up on the right instead.

In central midfield, it’s that tried-and-tested duo of Pierre-Emile Hojbjerg and Rodrigo Bentancur, with Yves Bissouma and Oliver Skipp both on the bench.

Up front, we can’t see Conte dropping Son now and letting him stew over the International break, so Richarlison drops to the bench and Kulusevski returns to partner Harry Kane and the South Korean. 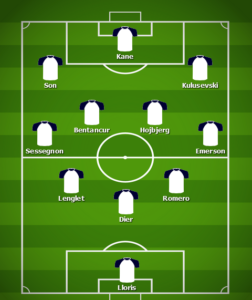