Home News Predicted Tottenham XI to take on Leicester in final match of the...
2
SHARES
ShareTweet

Tottenham Hotspur face a trip to Leicester City for their final match of the 2020/21 campaign this weekend. We believe that Ryan Mason will make a couple of changes for the match.

Hugo Lloris lines up between the sticks as usual, with Serge Aurier coming back into the XI for possibly his final game for Tottenham.

Japhet Tanganga misses out after that nasty injury he picked up last time out, while Matt Doherty takes his place on the bench.

Sergio Reguilon starts despite his horror own goal in mid-week, while Eric Dier and Toby Alderweireld also keep their places in the starting line-up.

Pierre-Emile Hojbjerg lines up alongside Tanguy Ndombele for this one, with the Frenchman finally getting the nod over Winks and Lo Celso under Ryan Mason.

Dele Alli starts yet again for the Lilywhites, with Gareth Bale coming back in to replace Steven Bergwijn. Harry Kane and Heung-min Son lead the attack, with Spurs fans hoping it won’t be the last they see of the former. 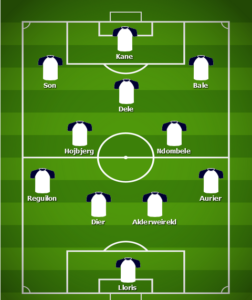