Tottenham Hotspur face off against the reigning Premier League champions this evening in their season opener.

Although it will be Nuno Espirito Santo’s first game in charge, pre-season should give us a pretty accurate idea of who he is going to start today.

We believe that Hugo Lloris will line up between the sticks, wearing the captain’s armband as usual.

The back four will also remain unchanged from the Arsenal game last week, with Sergio Reguilon, Eric Dier, Davinson Sanchez, and Japhet Tanganga making up the defence.

The game comes too soon for new signing Cristian Romero, however, Pierluigi Gollini does make the bench for the first time.

Oliver Skipp and Pierre-Emile Hojbjerg line up in a central midfield partnership we should hopefully be seeing a lot of this season, while Dele Alli serves as a more creative and advanced midfielder. Lo Celso makes the bench to be used as an impact sub.

The front three, as it has done for most of pre-season, consists of Heung-min Son, Lucas Moura, and Steven Bergwijn, with Harry Kane making the bench. 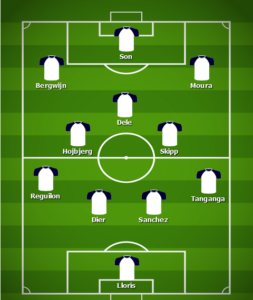