Tottenham Hotspur face the unenviable task of facing a red hot Manchester City in the Premier League weekend, with the Lilywhites in the midst of some poor form of their own.

We believe that Jose Mourinho will keep faith with Hugo Lloris despite recent mistakes against Liverpool and Everton.

Serge Aurier returns to the lineup after missing the Everton match through injury, while Ben Davies soldiers on at left-back despite playing plenty of minutes recently.

Mourinho opts for fresh legs at the back with Joe Rodon and Eric Dier coming into the centre of defence.

Pierre-Emile Hojbjerg and Moussa Sissoko provide defensive stability in midfield as they did in the 2-0 win over Man City earlier this season.

Tanguy Ndombele and Erik Lamela serve as the chief creators in the Tottenham side, with Harry Kane and Heung-min Son offering the main threat in front of Ederson’s goal.

Dele Alli also takes his place on the bench. 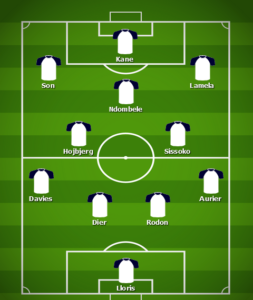 ‘Tearing around’ – Two Spurs starlets reveal who tackles hard in...