Tottenham Hotspur take on Marseille at home in the Champions League this week, their first taste of Europe’s premier competition for over two years.

With Antonio Conte making five changes between the mid-week trip to West Ham and the weekend’s victory over Fulham, we are expecting another shuffle of the pack.

Conte now has a far stronger and deeper squad at his disposal, and is able to make changes without necessarily weakening the team.

Club captain, Hugo Lloris, will retain his spot between the sticks, while Ben Davies will return to the back line to join Eric Dier and Cristian Romero.

In the wing-back roles, Emerson Royal will continue to be an everpresent on the right, while Ivan Perisic will return to the XI on the left.

In the centre of the pitch, Pierre-Emile Hojbjerg may be rested, with Yves Bissouma coming in to partner Rodrigo Bentancur.

Meanwhile, up front, Richarlison drops back to the bench, with Conte naming a familiar front three of Harry Kane, Heung-min Son, and Dejan Kulusevski. 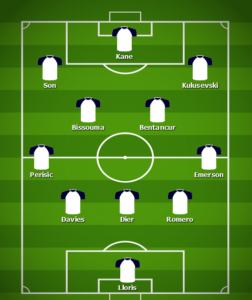 Report: Emerson Royal has spent £800k on three things to improve at Spurs

Manager admits it would be a ‘dream’ to sign Tottenham player

Manager admits it would be a ‘dream’ to sign Tottenham player