Tottenham Hotspur take on Newcastle United this weekend in the Premier League as the players return from the international break.

We believe that Hugo Lloris will take up his usual position between the sticks, with Joe Rodon rewarded for his impressive performances for Wales this week.

Davinson Sanchez lines up alongside the Welshman, with Japhet Tanganga at right-back following his return from England U21 duty and Sergio Reguilon recovering from injury to start on the left.

Pierre-Emile Hojbjerg, who also enjoyed a successful international break with Denmark, starts in the engine room alongside France’s Tanguy Ndombele.

Lucas Moura plays at his new number 10 role, with Gareth Bale back in the starting XI on the right after his trip away with the Wales team.

Harry Kane leads the line off the back of two goals and an assist in two games for England, while Heung-min Son returns from injury to start on the left side of attack. 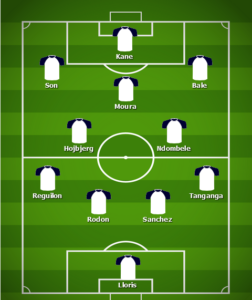 Premier League announce who will be officiating the North London derby

‘Comedy club’ – Some fans frustrated by reports Spurs are monitoring...

‘Never seen a Spurs side’ – Hoddle reveals alarming thing he...