Tottenham Hotspur face a trip to Slovenia this week as they take on NS Mura in the Europa Conference League, in need of a win to keep pace with Rennes at the top of Group G.

We believe that, although Antonio Conte will take a strong squad with him on Thursday, he will make changes to the starting XI.

Pierluigi Gollini comes into the line-up, with Hugo Lloris dropping to the bench. Ryan Sessegnon also starts at left-wing-back, with Sergio Reguilon rested.

In the centre of defence, Joe Rodon and Davinson Sanchez are handed chances to impress from the start, while Eric Dier continues to command the central role.

In midfield, Oliver Skipp returns after his suspension against Leeds United, this time partnering Tanguy Ndombele as Pierre-Emile Hojbjerg is rested.

Up front, Steven Bergwijn comes in for Lucas Moura, while Heung-min Son retains his spot and Harry Kane is replaced by Dele Alli. Bryan Gil only makes the bench on this occasion. 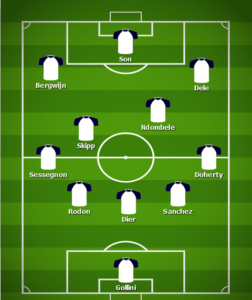 Sessegnon opens up on Conte, injuries, and kickstarting his Spurs career now

Predicted Tottenham XI to take on NS Mura in the Europa...

Ryan Sessegnon reveals whether he thought he may have to leave...

Sessegnon opens up on Conte, injuries, and kickstarting his Spurs career...

Ryan Sessegnon reveals whether he thought he may have to leave...