Tottenham Hotspur take on Pacos de Ferreira in the Conference League this evening as they look to qualify for the group stages across the two-legged qualifier.

We believe that Nuno Espirito Santo will hand minutes to some of his fringe players and academy starlets in Portugal after the monumental effort against Man City on Sunday.

New signing Pierluigi Gollini starts between the sticks for his competitive debut in a Tottenham shirt, while Cristian Romero gets his full debut from the start.

Ryan Sessegnon returns to the Spurs XI after a successful loan period, lining up at left-wing back with Ben Davies tucked inside. On the other side, Matt Doherty is the right-wing-back, with youngster Maksim Paskotsi next to him.

In the centre of the park, Harry Winks and Nile John partner each other, with the creativity of Giovani Lo Celso and new signing Bryan Gil just ahead of them. Finally, Dane Scarlett leads the line in the absence of Harry Kane. 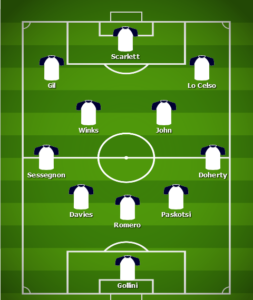 Journalist reveals Spurs midfielder has not travelled to Portugal

Predicted Tottenham XI to take on Pacos de Ferreira in the...

Journalist claims Spurs are ‘in contact’ with agent of Arsenal midfield...

Nuno admits youngster who ‘did so well in pre-season’ will make...