Tottenham Hotspur take on Sporting Lisbon in the Champions League in mid-week as they search for another three points that would send them top of Group D.

Let’s take a look at who we think will make Conte’s starting XI:

Hugo Lloris, as always, will line up between the sticks for Tottenham, with Emerson Royal and Ivan Perisic remaining the first-choice wing-backs as they were against Marseille.

In defence, we see one change from Conte, with Ben Davies coming back in for Clement Lenglet. Eric Dier and Cristian Romero keep their places in the Spurs line-up.

In the middle of the park, Conte once again opts for his tried-and-tested duo of Pierre-Emile Hojbjerg and Rodrigo Bentancur. There may have been changes in the offing originally, but with cancelled Premier League fixtures, there is less need for rotation.

In attack, we believe that Kulusevski will come back into the XI, as it would seem harsh for Conte to bench an in-form forward for three games in a row. Heung-min Son and Harry Kane retain their places, with Richarlison dropping back to the bench for the week. 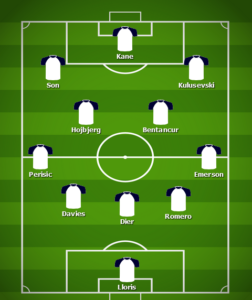 Peter Crouch claims one Spurs star is ‘trying too hard’ at the...

Peter Crouch claims one Spurs star is ‘trying too hard’ at the...