There are no prizes for guessing the starting XI for Tottenham Hotspur this week when they travel to face London rivals West Ham United tomorrow afternoon.

We believe that Nuno Espirito Santo will name an unchanged line-up from the last Premier League win over Newcastle, making 11 changes from Thursday night.

Nuno decided to leave the Newcastle starters at home when Tottenham travelled to the Netherlands to face Vitesse Arnhem in the Europa Conference League this week.

As such, we believe that Hugo Lloris will start between the sticks for Spurs against the Hammers, with a back four of Sergio Reguilon, Eric Dier, Cristian Romero, and Emerson Royal.

In midfield, we expect Oliver Skipp to line up alongside Pierre-Emile Hojbjerg, with Tanguy Ndombele in the number 10 position further up the pitch.

Up front, the trio of Harry Kane, Heung-min Son and Lucas Moura will look to continue their fine attacking form against West Ham. 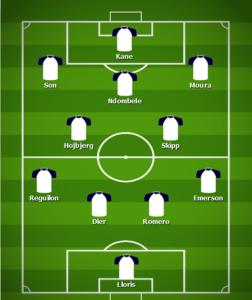