Tottenham Hotspur face a tough away trip to Wolves on the 27th as they look to rebuild some kind of domestic momentum after a disappointing two weeks.

We believe that Hugo Lloris will line up between the sticks for the Lilywhites in two days time, with a rather familiar back four of Serge Aurier, Toby Alderweireld, Eric Dier, and Sergio Reguilon.

Jose Mourinho will also revert back to his first-choice central midfield pairing of Pierre-Emile Hojbjerg and Moussa Sissoko to deal with the threat of Wolves.

Tanguy Ndombele missed out against Stoke but returns to starting XI duty this week due to the injury to Giovani Lo Celso.

Despite playing 90 minutes against Stoke City in the Carabao Cup, Harry Kane starts for Spurs yet again, this time joined by Steven Bergwijn and Heung-min Son on either wing. 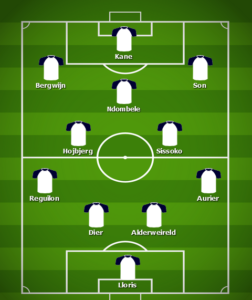 Report: Club desperate to cash in on two Spurs targets after £160m losses

Report: Club desperate to cash in on two Spurs targets after...