Home News Reguilon names ex-Spurs man as one of two most difficult opponents he...
32
SHARES
ShareTweet

Sergio Reguilon has named Manchester City defender and former Tottenham man Kyle Walker as the toughest opponent he has faced in his career so far.

Walker established himself as one of the top full-backs in Europe during his time at Spurs, before making the move to Pep Guardiola’s side in 2017.

Known for his electric speed in both short and long distances, the 31-year-old has three Premier League titles to his name, as well as four League Cup wins and an FA Cup crown.

He also finished as a runner-up with City in the Champions League last season, falling narrowly to Chelsea, before having to settle for second place with England at Euro 2020 a couple of months later.

Current Spurs full-back Reguilon, who himself possesses a solid burst of pace, was asked to name the toughest opponent he has come up against in his career.

He was sure to name Walker, but he also gave a mention to his City teammate Riyad Mahrez, who both form a difficult right-hand side to defend against.

When asked to share his toughest opponent, Reguilon told Pro-Direct Soccer: “I think against Manchester City. But not one player, Kyle Walker and Riyad Mahrez. Down that side, they were too difficult.”

City have such an abundance of quality, so it isn’t too shocking that Reguilon named Walker and Mahrez together as the toughest opponents he has faced. They are both tricky players in their own ways with their pace going forward and defensively. 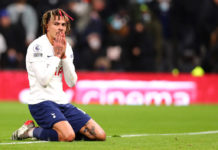