According to The Daily Mail, Arsenal are keeping tabs on Dinamo Zagreb midfielder Mislav Orsic, who dumped Tottenham Hotspur out of the Europa League last week.

Just as the word ‘Amsterdam’ will be associated with a feeling of ecstasy for Spurs fans for years to come after the North Londoners’ unbelievable comeback in the 2019 Champions League semi-final, the word ‘Zagreb’ will live long in the memory of the Tottenham faithful as one of the darkest moments in the club’s European history.

Tottenham went into the second leg as overwhelming favourites after they saw off Dynamo 2-0 at home in the first match.

However, Jose Mourinho’s men put in an abject performance in Zagreb as Orsic netted a hat-trick to help the Croatian side complete a historic turnaround.

Mourinho admitted after the game that he was well aware of what Orsic was capable of and warned his players about the 28-year-old’s quality.

If The Daily Mail is to be believed, Tottenham fans might not have seen the last of the midfielder, with Arsenal now keeping tabs on him ahead of a potential summer move. 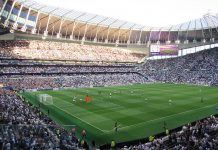