Home News Report: Club can only pursue Tottenham man after cashing in on winger
39
SHARES
ShareTweet

According to a report in the print edition of De Telegraaf (as relayed by Sport Witness), Ajax must first raise funds through player sales before they can make a move for Tottenham winger Steven Bergwijn.

Bergwijn was handed his first start under Antonio Conte in Tottenham’s win over West Ham in the Carabao Cup in December, with the winger picking up a goal and an assist in the encounter.

Conte had words of praise for the Netherlands international after his performance against the Hammers but unfortunately, the 24-year-old subsequently picked up a calf injury that has prevented him from getting more starts under his belt.

Fabrizio Romano told Skrill last week that the former PSV Eindhoven man could be one of the players to exit Spurs during the January window.

Ajax have been credited with a ‘serious interest’ in bringing the Tottenham man back to the Eredivisie this month.

However, De Telegraaf have now explained that the operation might not prove straightforward for the Dutch club.

The report claims that Ajax’s sporting director Marc Overmars can ‘go fully’ after Bergwijn only after raising some funds through player sales.

It is said that the Eredivisie club are looking to cash in on David Neres before making a move for the Spurs player.

Neres is said to be attracting a lot of interest, with Shakhtar Donetsk thought to be at the front of the queue for the Brazilian’s signature. 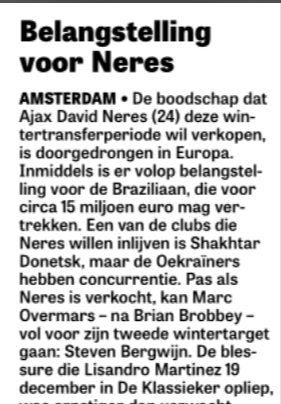 Even if Conte adds to his forward line this month, I still expect Bergwijn to stay at least until the end of the season.

The Italian would want to have as many options as possible at his disposal given Tottenham’s busy schedule over the next couple of months.

Besides, the Dutchman has certainly shown his qualities when he has been handed opportunities.

‘There’s no doubt’ – Journalist claims Spurs would consider move for...