Multiple Portuguese outlets have now revealed that Sporting Lisbon are prepared to be patient in their negotiations with Tottenham for Pedro Porro.

It emerged on Wednesday that Spurs had launched their opening offer for Porro, with Fabrizio Romano taking to social media to reveal that the north London club’s opening offer for the right-back had been rejected by Sporting, who were continuing to demand that the player’s £40m release clause must be met.

Record (via Sport Witness) also backed up this information yesterday, stating that Spurs’ offer of €34m (£29.7m) plus bonuses for the Spaniard had been turned down by the Portuguese club. 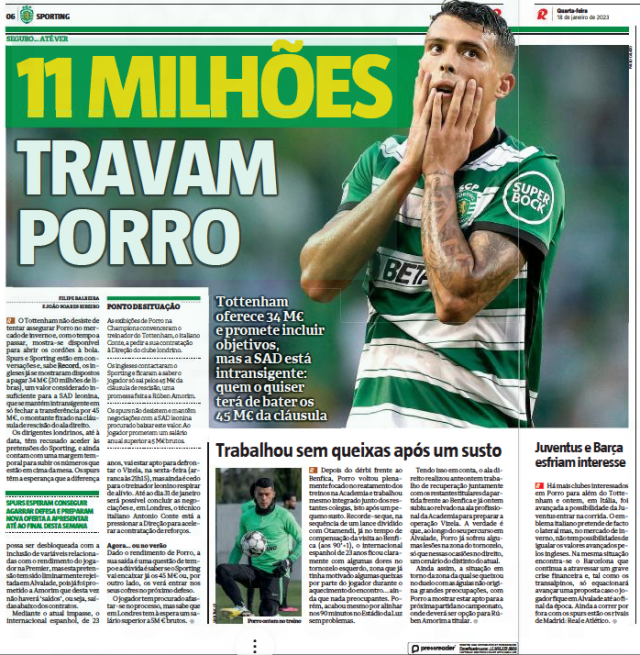 Sport Witness have now relayed the latest updates from O Jogo and A Bola on Porro’s future and it does not make promising reading for Spurs fans.

O Jogo state that Sporting are ready to ‘maintain the game of patience’ in their negotiations with the Premier League club for the right-back.

The publication suggests that Ruben Amorim’s side are ‘in no hurry’ to complete a sale, given that there are still just under two weeks remaining of the January transfer window.

Meanwhile, A Bola have reported that Tottenham are ‘very far’ away from meeting Porro’s £40m release clause and a transfer is now becoming ‘more unlikely’.

I do not think Spurs fans should lose hope yet as these seem like standard negotiating tactics from both clubs. The fact that Tottenham are seemingly not in talks regarding any other right wing-back and putting all their eggs in the Porro basket, suggests that they are relatively confident that they can complete the deal before the window shuts.