Tottenham have previously been linked with a move for Lille midfielder Boubakary Soumare (The Sun).

A report in Monday’s edition of French newspaper L’Equipe (as relayed by Sport Witness) claims that Lille are ready to sanction the midfielder’s sale in January.

Lille were initially determined to keep hold of the 20-year-old but the form of Renato Sanches is said to have convinced the French club to cash in on Soumare in January.

The Ligue 1 side will reportedly demand between €50-60m for the youngster in order to sanction a sale next month. While Real Madrid, Valencia, and Napoli are also said to be tracking Soumare closely, England is said to be the Frenchman’s preferred destination. 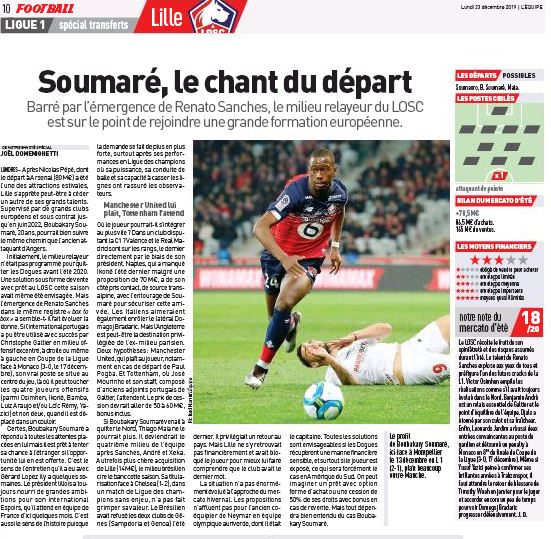 Spurs are also said to have an advantage due to Jose Mourinho’s and Joao Sacramento’s good relationship with Lille sporting director Luis Campos.

It is claimed that the Portuguese duo are waiting for Soumare’s arrival in North London.

I believe there are definitely legs to this rumour given how well Sacramento and Nuno Santos know Soumare. However, I am not sure that a defensive midfielder should be a priority for the club in January as there are other areas like full backs and wide forward that are in more immediate need of reinforcements.

Report: Spurs could launch a bid for another Juventus star this summer

Report: Spurs to turn to Premier League midfielder if they fail to land Christian Eriksen

Report: Spurs could launch a bid for another Juventus star this...