According to Voetbal International, Paris Saint-Germain are now ready to challenge Tottenham in their rumoured pursuit of Sergino Dest.

The 19-year-old’s performances since breaking into the Ajax side this season have propelled him into the limelight.

Tottenham are said to be long-term admirers of the teenager, having been linked with a move for him last summer (Bleacher Report).

The Lilywhites reportedly also had a £17million offer for the right-back turned down in January (De Telegraaf) and have been backed to return for the USA international’s services this summer (Calcio Mercato).

Football.London’s Alasdair Gold revealed this week that Dest is someone who Spurs like and admitted that he would not be surprised if the North Londoners make an enquiry for the young defender.

However, Voetbal International have now claimed that PSG have earmarked Dest as the man to replace Thomas Munier, who is expected to leave Paris this summer when his contract runs out.

They claim that the Ligue 1 giants are looking to secure the defender’s signature for around €25million (£22million).

Dest is a brilliant prospect who is destined for a bright future in the game. However, there are a lot of question marks over his defensive capabilities and the Premier League is a different kettle of fish to the Eredivisie. With Aurier looking like he is set to stay, I would expect Mourinho to want to bring in a more defensive-minded right-back in order to give the squad better balance. 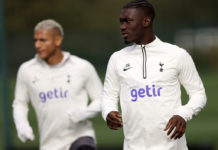