According to reports from Portugal, Everton’s pursuit of Sporting midfielder Matheus Nunes might scupper Tottenham’s chances of signing Joao Palhinha this summer.

After impressing during his two seasons on loan at Braga from 2018 to 2020, Palhinha was one of Sporting’s most consistent performers last season on his return to Lisbon and he followed that up with a couple of impressive displays at the European Championships.

Reports first emerged in June that the 26-year-old was of interest to Tottenham and some sources suggested last week the Portuguese club were prepared to cash in on the midfielder in order to raise transfer funds.

However, the print edition of Record (as relayed by Sport Witness) now claim that Sporting would rather sell Nunes than Palhinha as that would give the club ‘less headaches’ on a sporting level.

The report adds that Everton are among the clubs interested in Nunes, who is thought to be valued by Sporting at €20m (£16.9m). 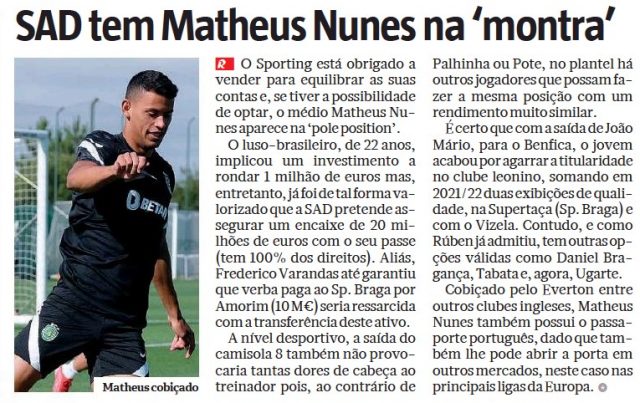 This claim is also backed up by O Jogo (via Sport Witness) who claim Everton want the 22-year-old but the Toffees would have to sell first before they can buy the youngster.

The central midfield department is not as much of a priority as centre-back, right-back and a new striker. So, while I would expect us to bring in a midfielder (to potentially replace Sissoko and Winks), I would be surprised if we spent more than £20m-£30m to strengthen the area this summer.