Home News Report reveals how much clubs would need to pay for Vlahovic in...
0
SHARES
ShareTweet

The Daily Mail have revealed that it would take a total expenditure of £150m for the likes of Tottenham and Arsenal to sign Fiorentina striker Dusan Vlahovic in January.

Tottenham have been heavily linked with a move for Vlahovic since Antonio Conte’s arrival at the club at the start of November while the likes of Arsenal, Manchester City and Juventus have also been credited with an interest in the striker.

The Daily Mail have now revealed that both Arsenal and Spurs have enquired about the cost of signing the 21-year-old this month.

The report claims that clubs would have to pay a transfer fee of £58m while the centre-forward is also demanding a five-year contract worth £300,000-per-week.

In addition, it is explained that any deal for the Fiorentina man will also include £15m in fees to the player’s camp.

The Mail claim that the additional payments to the player’s representatives is a major sticking point for clubs across Europe.

However, it is asserted that Arsenal have not been put off by the substantial financial demands and are working on a deal to sign the striker.

I do not think there is any chance of Spurs spending the aforementioned amount on Vlahovic, now that it looks like Kane is set to stay.

It would make more sense for Arsenal to do so as the Serbian will be the main for the Gunners if he moves to the Emirates.

However, I suspect Vlahvoic will hold out for a move to the likes of City or Juventus where he could compete for titles more regularly.

Report: Tottenham are ‘monitoring’ player who has asked to leave PL rival 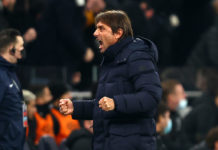 Report reveals how much clubs would need to pay for Vlahovic...

‘They have started to talk’ – Conte offers positive contract update...