According to Gianluca Di Marzio, Roma made contact with Jose Mourinho immediately after he was sacked by Tottenham Hotspur two and a half weeks ago.

It was announced on Tuesday that Mourinho woud be returning to Serie A eleven years after his stint at Inter Milan where he won a historic treble in 2010-11, with the Portuguese taking over from Paulo Fonseca at the Stadio Olympico at the end of the season.

It had been reported in the days prior to his appointment that the former Spurs boss had turned down Celtic’s approach and would carefully consider his next project.

However, it did not take long for Roma to convince the 58-year-old to sign on the dotted line.

Di Marzio revealed that contact between the Italian club and Mourinho started right around the time of his sacking at Tottenham.

Roma director Tiago Pinto is said to have contacted Valdir Cardoso, Jorge Mendes’ right-hand man to ask if Mourinho was open to joining them after which the Serie A club’s owners had an in-person meeting with Mourinho in London.

Di Marzio also backs up other claims emanating from Italy that the Portuguese coach has signed a contract worth €7m-a-year (£6m) at Rome but he will continue to earn the €16m-a-year (£14m) that he did during his time at Spurs, with the North Londoners set to paying the remaining £8m. 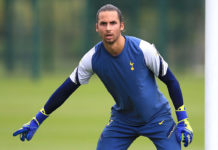