According to the print edition of AS (as relayed by Sport Witness), Tottenham winger Steven Bergwijn is on Sevilla’s radar.

Reports over recent days have indicated that Tottenham are willing to cash in on Bergwijn this month.

Ajax have been credited with an interest in the 24-year-old, with the Eredivisie champions set to launch a £20m offer for the Spurs star after their £15m bid was allegedly knocked back by Spurs.

Newcastle United are also said to be keen on signing the former PSV Eindhoven man on loan. However, Antonio Conte insisted on Tuesday that the winger remains part of his plans.

AS have now claimed that despite Conte’s assertion, Tottenham are open to cashing in on Bergwijn this month.

The report claims that Sevilla have identified the Spurs star as an alternative to Anthony Martial should a deal for the Man Utd forward not prove feasible.

However, it is explained that a deal for Bergwijn will be difficult for Julen Lopetegui’s side to pull off given the economic cost of the operation. 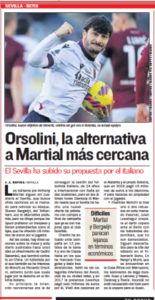 I suspect Conte’s statement regarding Bergwijn might simply be a smokescreen. One would think that so many clubs would not express interest in the 24-year-old unless Tottenham had alerted them about the winger’s availability.