Home News Report: Spurs have ‘abandoned’ midfielder pursuit due to ‘too high a price’
302
SHARES
ShareTweet

According to a report in the print edition of La Nuova Sardegna, Tottenham Hotspur have abandoned their pursuit of Nahitan Nandez due to Cagliari’s high valuation.

Nandez has enjoyed two solid campaigns for Cagliari since arriving in Italian football from his native Argentina back in the summer of 2019.

The speculation linking Spurs with Nandez went into hyperdrive last week, with the North London club thought to be accelerating a €30m (£25.6m) deal for the Cagliari star.

The Uruguay international had reportedly put in a transfer request and was alleged to be keen on completing a move to Tottenham.

However, Fabrizio Romano then seemed to put an end to the speculation when he tweeted over the weekend that the Lilywhites had pulled out of the race for the Cagliari star.

La Nuova Sardegna have now backed up that claim, stating that Tottenham ‘seem to have abandoned’ their pursuit of Nandez. 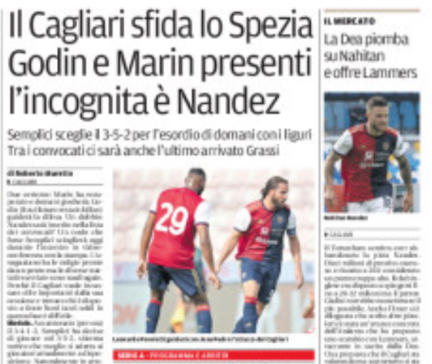 This came after the same publication previously reported that the midfielder was close to completing a move to Tottenham.

Even though the Nandez deal appears to be dead in the water, Spurs have reportedly agreed a deal for Pape Sarr. However, with the teenager likely to be loaned back to Metz, Nuno would might another midfield addition before the window closes to replace Moussa Sissoko.

Pundit claims Kane has been subject of ‘snide comments and poisonous...

Pundit claims Kane has been subject of ‘snide comments and poisonous...