According to the print edition of Corriere dello Sport, Tottenham midfielder Tanguy Ndombele remains on AS Roma’s radar.

Ndombele’s departure from Spurs seems inevitable after the midfielder was asked to train on his own, away from the rest of the Tottenham squad (Football.London).

The likes of Juventus, AS Roma and Napoli, have been credited with an interest in the midfielder (Calcio Mercato).

Over recent days, Paris Saint-Germain have emerged as the favourites to snap up the Frenchman on loan, with the Ligue 1 giants thought to be in talks with Spurs over a deal (Guardian).

However, if Corriere’s update is to be believed, Roma continue to be in the race for Ndombele’s signature. 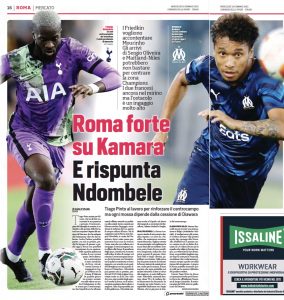 The publication states that Spurs have offered the 25-year-old to the Serie A club and that former Tottenham boss Jose Mourinho maintains a good relationship with the player despite the pair having some differences in the past.

It is explained that the Giallorossi consider Ndombele to be an alternative to Marseille midfielder Boubacar Kamara, who is alleged to be the club’s number one target.

The report does, however, add that the former Lyon man’s wages would be a significant hurdle for Roma in completing the deal.

I fully expect Ndombele to join PSG before the end of the month. The midfielder is proven in Ligue 1 and we know that Pochettino rates him highly.

The Ligue 1 giants would also be one of the few clubs who could afford to match the 25-year-old’s current salary, which would be a major sticking point for Spanish and Italian clubs.

Report: Spurs have sent ‘proposal’ to sign Ligue 1 star with 21 goals this season

‘So impressive’ – Ledley King sings the praises of 22-year-old Spurs...

Report: Spurs have sent ‘proposal’ to sign Ligue 1 star with...

‘Next few days’ – Tottenham-linked striker lifts the lid on his...