Tottenham Hotspur have already in talks with Barcelona to land Barcelona’s Miralem Pjanić.

Today’s print edition of Spanish newspaper Sport claims that Tottenham asked about the 31-year-old’s availability a number of weeks ago, with new coach Nuno Espirito Santo having given his backing to pursue a deal.

It is suggested that the midfielder is likely to head out on loan this summer with a number of clubs having registered their interest.

Pjanić’s preference is said to be to return to former club Juventus, however, the Serie A giants are reportedly focusing their attention on landing Italy and Sassuolo midfielder Manuel Locatelli.

He previously played under Tottenham’s managing director of football, Fabio Paratici, at the Old Lady and experienced a difficult campaign at the Nou Camp last season, partly due to injury after only starting six La Liga fixtures (transfermarkt).

Tottenham are reportedly prepared to cover the midfielder’s wages providing the Catalan outfit do not look to demand a loan fee, with Barcelona keen to reduce their wage bill. 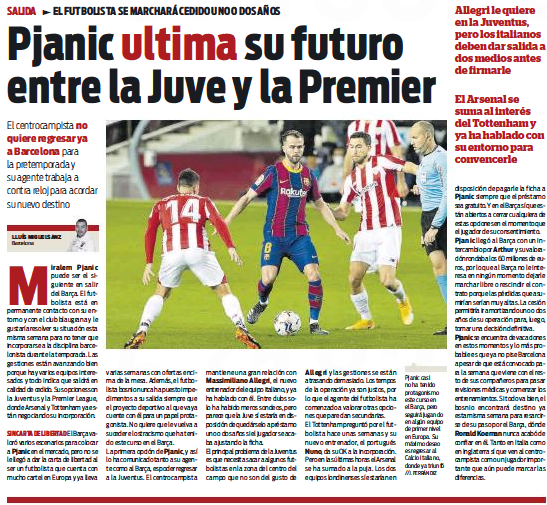 Pjanić would be a shrewd loan signing for Tottenham which could help them to focus their transfer funds on other targets.  He proved at Juventus what a talented midfielder he is and hopefully the influence of Paratici can help persuade him to make the move to North London.

Report: Manager does not want to let rumoured Spurs target leave in January

Report: Spurs have been in contact about midfielder but player has refused move