The youngster has been one of the mainstays of the Freiburg defence this season, notching up 19 appearances so far in the Bundesliga (transfermarkt) and it looks like his performances might be turning the heads of some big clubs.

A report by Portuguese publication Record (as relayed by Sport Witness) claims that Spurs are one of several clubs following Koch’s progress. 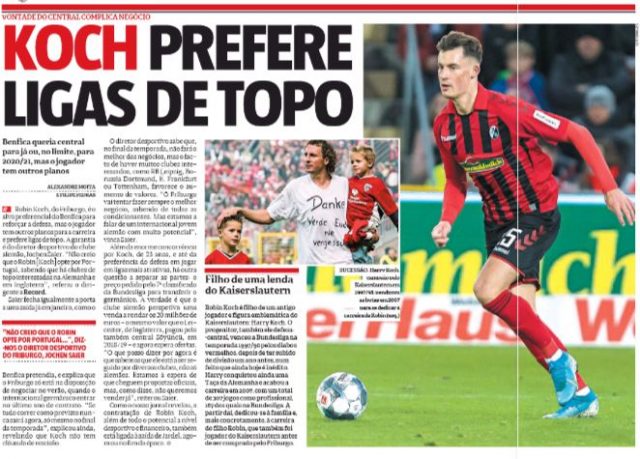 The report, which covers Benfica’s interest in Koch claims that Freiburg are unlikely to sell the 23-year-old this month and want to wait until the summer as they expect more clubs to be interested in him.

The publication quotes Freiburg director Jochen Saier as saying: “I don’t think Robin opts for Portugal, knowing that there are top clubs interested in Germany and England.

“If everything goes as planned, he won’t come out now, only at the end of the season. Freiburg will always try to make the best deal, knowing all the conditions. But we are talking about a young German international with a lot of potential.”

The report names Spurs along with RB Leipzig, Borussia Dortmund and Eintracht Frankfurt as clubs who are potentially considering Koch as an option.

While Toby Alderweireld has signed a long term deal at Tottenham, Jan Vertonghen’s current contract runs out at the end of the season and the Lilywhites could be in need of fresh blood to bolster their defensive options.

With Alderweireld committing his future, we are still fairly well-stocked at centre back even if the club doesn’t offer Vertonghen an extension. With Sanchez, Dier, Foyth and Davies all capable of doing a job in central defence, we aren’t in urgent need of reinforcements. A lot depends on how highly Mourinho rates the likes of Sanchez and Foyth.

‘Kane hat trick against us’ – Some Spurs fans react to...

‘Kane hat trick against us’ – Some Spurs fans react to...