Home News Report: Spurs still have striker on shortlist but transfer this year is...
0
SHARES
ShareTweet

Tottenham Hotspur still have Wolfsburg striker Wout Weghorst on their shortlist but a move is unlikely to happen this transfer window, according to SPORTBild (via Sport Witness).

The report suggests that Tottenham and Inter Milan both have the 29-year-old on their list of potential signings. However, the possibility of it happening now is low due to the inability for the German club to find a replacement in time.

Despite Harry Kane now confirming he is staying at Tottenham this season, it appears a striker could still be in an area in which Spurs look to bring in a player. Alasdair Gold recently reported that Spurs would look to either sign a new striker or Adama Traore.

It is not much of a surprise, therefore, that Spurs still have a reported interest in the Netherlands international.

The striker has a great goal return for the German club. He has scored 65 goals for Wolfsburg in all competitions and is also fresh off a 20-goal-season in the Bundesliga.

However, a deal for the striker this transfer window is now reportedly unlikely. 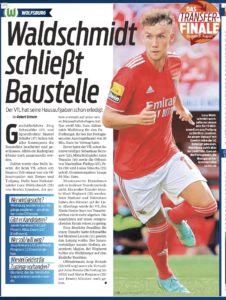 Weghorst is a good striker in his prime. It is not a surprise that a deal is off the cards with it being this late in the window. He is too good to be a backup so Spurs’ reported interest would surely have been due to the potential loss of Kane.

Report: Spurs still have striker on shortlist but transfer this year...