Home News Report: Spurs to hold onto loanee for the remainder of the season
2
SHARES
ShareTweet

Tottenham Hotspur will look to keep faith with Carlos Vinicius until the end of the season, according to Portuguese news outlet O Jogo, as relayed by Sports Witness.

The striker made the move to North London on a season long loan switch from Portuguese giants Benfica after Spurs finally ended their search to provide cover for Harry Kane.

Vinicius has found regular first team football hard to come by this season having played just twelve minutes of Premier League action and all three of his goals coming in the Europa League (transfermarkt).

Competitions for places in the final third of Mourinho’s team is competitive with Vinicius having to battle the likes of Harry Kane, Heung-min Son and Gareth Bale.

Mourinho recently admitted that the forward needs to be more physical to play in the Premier League (teamTALK). 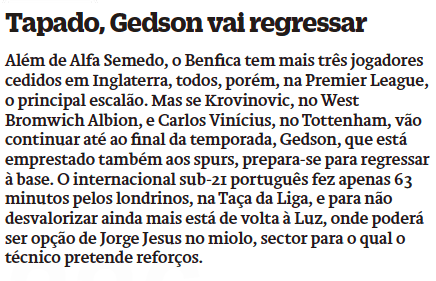 While Vinicius’ opportunities have been limited, he has shown in his Europa League outings that he has the potential to be a good player for the club with his link-up play bringing others into the game.

Report: Cristian Romero getting ‘closer and closer’ to Spurs move

‘I’ll keep pushing’ – Oliver Skipp opens up on return to...

Report reveals what Cristian Romero is set to do today to...

Report: Cristian Romero getting ‘closer and closer’ to Spurs move