Radu Dragusin may now have a future at Juventus beyond this season, according to Italian newspaper Tuttosport.

The 19-year-old is out of contract at the end of the season in Turin and it is now said that the Old Lady are working on a new deal for the Romanian, along with former Spurs target Paulo Dybala.

Dragusin’s future with the Serie A outfit was said to be uncertain but it now appears that they will be offering him a new deal.

The central defender has featured mainly for the club’s Under-23s side this season but has recently seen some recent first-team action in the Coppa Italia, having played against both Genoa and SPAL last month (transfermarkt).

Tuttosport (via Sport Witness) claimed that Tottenham Hotspur were linked with a move for the Romanian Under-21 international along with RB Leipzig.

Dragusin is said to be in no rush to sign a new deal and is weighing up his options with his representatives due to his lack of game time and is currently able to hold discussions with overseas clubs. 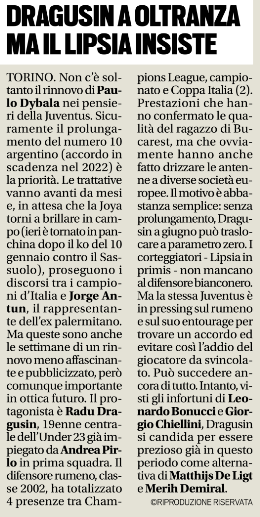