Home News Some Spurs fans call for Nuno to hand youngster a chance after...
15
SHARES
ShareTweet

Some Spurs fans on social media are calling for Alfie Devine to be handed first-team opportunities after the midfielder scored a brace to help Tottenham’s Under-23s beat Liverpool 2-1 this week.

Devine had a terrific first season at Tottenham after joining from Wigan’s academy last summer, impressing for the club’s Under-18s as well as the Under-23s, while also training with the first team on several occasions.

The teenager made his senior debut for the club in their FA Cup clash against Marine last season, becoming the youngest ever player to pull on a Spurs shirt (16 years and 163 days) and he marked the occasion with a well-taken goal.

The 17-year-old penned his first professional contract with the Lilywhites last month, committing himself to the club until 2024.

Devine has made another strong start to the season, with his brace against the Reds taking his tally to three goals and one assist in the first four games for the Under-23s.

On the back of his performance, some Tottenham fans are insisting that they would prefer to see the former Wigan youngster start over the likes of Harry Winks and Dele Alli.

He should genuinely be starting ahead of Winks

Replace him with Winks. https://t.co/vy0eYP2DDQ

Should be starting ahead of Winks and Dele https://t.co/uVvnTyB35Y

How about you play Devine instead of Winks? A little creativity in midfield after yesterday’s shambles which every spurs supporter knew would happen having seen the lineup! Honestly it’s best the club don’t tweet anything until our next game. 🤡 https://t.co/EhrBndENsm

After our lack of creativity yesterday, we could have done with him on the first team. #THFC https://t.co/EudiKYMtI2

Promote him, better than most our midfielders https://t.co/uGvwpLMnHb

Would rather see him in the team than most of our other players tbh https://t.co/A6kVldZPtK

Devine is, undoubtedly, a fantastic talent but I am not sure he is ready to make the transition into the first team just yet.

If he continues to shine for the Under-23s, I would not be surprised if the club decide to loan him out to a Championship/League One club in January. 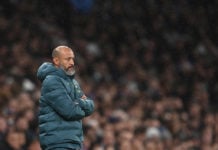