Tottenham Hotspur have been attempting to provide Harry Kane with a backup striker for years now, with Fernando Llorente coming the closest to success.

Although his first season was only littered with the odd cameo appearance, Llorente become somewhat of a cult hero during the Champions League campaign of last season.

However, Vincent Janssen was never really able to taste those highs in a Lilywhite shirt, scoring just six times in 42 games for Tottenham over three seasons (Wikipedia).

Spurs have finally now announced that they have put Janssen out of his misery and sold him to Mexican side, Monterrey, on a permanent deal.

One report states that Tottenham were able to recoup €7m of the money they spent on the 25-year-old Dutch striker, but Levy will just be happy to see him off the wage bill (VI).

It remains to be seen now whether Poch will choose to promote Troy Parrott, re-sign Llorente, or perhaps bring in a new name before deadline day.

Some Spurs fans took to Twitter to react to Janssen’s departure:

I genuinely thought he had loads of spark about him in and around the box. Finishing was massively off and his confidence took a hit but I think he could be very useful with a strike partner. Love the trolls on here humorlessly pointing out that the guy is making a joke! Lol!

Look how insane that is…

seemed like a nice guy, always put in his best and never made a fuss despite not being given much of a chance and being pushed out on loan, there’s no reason to dislike him, not his fault there was so much expectation on him

Imagine if Bale gets it

This stadium is a beauty ! the Most incredible in America ! ??

Hope you're right, but it's not an easy league as you may think, hope his not coming on a field trip

This move makes no sense to me. Holland to London to Mexico? I’ve never known a European player to go to Mexico from PL 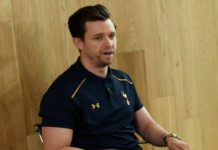 Report: Spurs could move for 28-year-old who Conte admired while at Inter Milan

Report: Spurs could move for 28-year-old who Conte admired while at...