Some Tottenham fans on social media picked up on an error that the club made while officially announcing the capture of Emerson Royal on Tuesday.

Spurs agreed on a fee of around £25.8m plus £4.3m in bonuses with Barcelona for the transfer of Emerson on the day the window closed.

The Brazilian takes the place of Serge Aurier, who agreed to mutually terminate his contract with Tottenham after four years at the club.

Emerson arrives in North London on the back of two impressive seasons at Real Betis and it has been reported that the conversations he held with Nuno Espirito Santo and Fabio Paratici were vital in helping convince the player to join the club.

However, it appears Tottenham’s social media team had a moment to forget when according to The Daily Express, they included an Argentina flag instead of the Brazilian flag emoji while welcoming the right-back to the club on their official Instagram page.

It is claimed that a number of Spurs fans picked up on the club’s mistake before it was deleted and re-posted.

The 22-year-old certainly appeared excited to get started on his new adventure at Spurs in his first address to the Tottenham fans after completing his transfer.

Emerson is still quite raw and is far from a finished product. In fact, his attributes are quite similar to Aurier’s and so, he might not be a massive upgrade over the Ivorian initially.

However, the fact that he is only 22 means that he has plenty of time to grow. Spurs fans need to be patient with the Brazilian and not judge him too quickly before he settles into the Premier League. 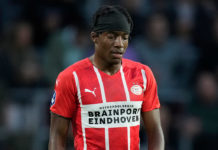 Report reveals where Tottenham rank in transfer spending from 2011-2020

‘We truly waste this guy’ – Some fans react to impressive...

Noni Madueke admits there was interest in him this summer amid...