Tottenham Hotspur were condemned to their first Premier League defeat on Saturday against their north London rivals Arsenal.

Spurs boss Antonio Conte decided to keep faith with his usual formation against the Gunners with Emerson Royal and Ivan Perisic occupying the wing-back roles.

With Spurs losing 2-1 to their rivals after Gabriel Jesus had prodded the home side in front early in the second half following Hugo Lloris’ awful handling error, Royal was shown a straight red card by referee Anthony Taylor for a high challenge on Gabriel Martinelli’s ankle.

Tottenham’s hopes of salvaging anything from the north London derby ended following the dismissal of the Brazilian, with Mikel Arteta’s side going on to canter to a 3-1 victory.

Conte had both Matt Doherty and Djed Spence on the bench, with the Republic of Ireland international coming on for the remaining 18 minutes at the Emirates while Spence remained an unused substitute.

The Mail have claimed that Spence’s sister, Karla-Simone has aimed a dig at Conte after leaving out Spence of his side when the actress took to Instagram to state how things ‘could’ve been different’ in a response to a post on the official Tottenham account of the final score. 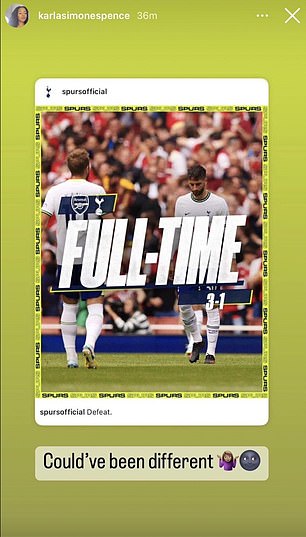 With Royal now suspended for the next three Premier League matches and fixtures coming thick and fast, fans will be hoping that Spence is given an opportunity to stake a claim for the right wing-back berth, especially if Doherty is still not ready to play a full ninety minutes as he continues his recovery from last season’s knee injury.

Royal has shown time and time again that he is still not up to the standard required to operate within Conte’s system, especially in the final third where he offers little in terms of creativity.