The Daily Star report that Tottenham have included the Champions League trophy as part of a special mural at the club’s Hotspur Way training ground, despite losing their lone trip to the final.

Spurs reached the finale in 2019 but were beaten 2-0 by Liverpool at the Wanda Metropolitano in Madrid.

An early penalty from Mohamed Salah and an insurance tally in the second half from Divock Origi was enough to stop Spurs from claiming a first Champions League crown.

Despite the heartbreaking defeat at the final hurdle, the club has chosen not to forget its stunning run in the competition, and has included the famous Champions League trophy as part of a large mural on a wall at its Enfield training ground.

The artwork was captured in a video uploaded onto Instagram by BBC and BT Sport presenter Reshmin Chowdhury. 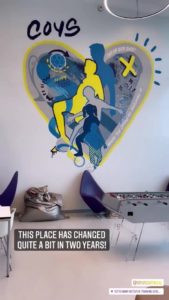 The mural, shaped as a yellow, blue and grey love heart, contains lines from two famous Spurs chants, including ‘When the Spurs go marching in’ and ‘Glory, glory, Tottenham Hotspur’.

The right-hand side of the mural contains an FA Cup trophy as an ode to the piece of silverware lifted eight times by Spurs.

But the opposite side appears to have a slightly hidden Champions League trophy, despite Spurs not having lifted the iconic award in the club’s six appearances in the competition in the past.

Spurs’ encounter against Liverpool was the club’s only appearance in the final, with a semi-final appearance, one quarter-final, two rounds of 16 and a group stage exit making up the other five.

Although Spurs didn’t manage to claim the Champions League two years ago, the club clearly recognises the run as something that should be remembered. The side continued to beat all the odds along the way – it was just unfortunate it didn’t culminate in winning the entire competition.