Home News Spurs youngster vows to ‘keep pushing’ and admits he is ‘grateful’ to...
0
SHARES
ShareTweet

Oliver Skipp has admitted he is determined to maintain the same standards he has shown over the past few months after establishing himself in the Tottenham first-team.

Many would have had high hopes for Skipp this season on the back of his impressive loan spell at Norwich last campaign.

However, few would have expected him to become one of the first names on the teamsheet at Spurs so quickly, but that is exactly what the England Under-21 international has done under both managers he has worked under so far this season.

Skipp stated that he is grateful to Nuno Espirito Santo for putting his trust in him but insisted he is not resting on his laurels.

The Tottenham academy graduate told the club’s matchday programme (as relayed by Football.London): “Everyone always says it’s not easy to get to the first team, but it’s easier to get there, the hardest part is to stay, and doing all the things that got you there in the first place, not changing too much because you’ve played a few games.

“That will be important for me over the next few months, to keep doing the things that have got me into this position, and that’s what I’ll be looking to do.

“I’m grateful for the opportunity that the former manager gave me to play the opening games of the season and for that to be continued in the first couple of games under Antonio Conte has been really good, something I’m also grateful for.

“I’m looking to push on, to continue working hard and keep pushing for a place in the team.”

Antonio Conte lavished praise on Skipp last week, insisting the youngster has all the qualities to develop into a top midfielder.

The Italian also said he believes he can make Skipp a better player, a prospect that the 21-year-old is excited by.

When asked about working with Conte, he said: “His record speaks for itself so, as a young player, you can only listen and take on as much information as you can.

“The attention to detail is amazing and you can see the passion from the touchline. That’s every day!

“As a player, you can only go with that. When, as a player, you see the boss on the touchline fighting for every ball, that can only help on the pitch. It’s been amazing to learn under him so far and I just look forward to him improving me further.”

The loan spell he had at Carrow Road was arguably the making of Skipp, with the midfielder maturing over the course of the season with regular competitive game time under his belt.

The Spurs youngster explained that the experience at Norwich proved invaluable for his development.

He said: “It was a crucial time for me in terms of getting regular games.

“You go out on loan with the hope that you’ll be able to play a significant number of matches, but I didn’t go to Norwich with the feeling that I’d play 45 of the 46 games and that the season would go as well as it did.

“I’m so grateful to the manager at Norwich (at that time, Daniel Farke) and all the players, they all helped me settle in so easily, and then helped to create the player that you see today.

“It was a massive part of my development, that season, going away from home, dealing with COVID-19 restrictions, and that all meant my sole focus was playing week in, week out against all different kinds of opposition in the Championship.

“One week you’ll play a team like Wycombe, who will play longer, and are very good at it, the next week it will be Swansea or Brentford, possession-based teams. That was good to help my development, coming up against those different styles.

“The loan also helped develop me outside of football and you can’t underestimate how important it is to get that right to make sure you are performing on the pitch.

“It helps you grow up and become independent, having to do all the things you take for granted when you are younger, the things other people do, the things you don’t have to do yourself, so it was a really good experience In that way.

“I got on with all the players so well, they all helped me and made sure I had everything | needed. Then it was up to me to make sure I made the most of it, something I was desperate to do to get first-team football.

“You can train with the first team week in, week out, and that’s amazing, but I just felt I needed that football and Norwich gave me the opportunity.”

While Skipp’s technical qualities and tenacity are there for all to see, what impresses me most about him is his maturity at such a young age.

The midfielder comes across as someone who has his head screwed on and is determined to get better, which is why I suspect Conte will love working with him. 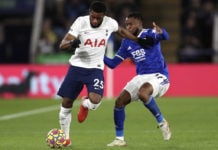