Tim Sherwood has claimed that Tottenham could go far in this season’s Champions League as their style of play under Antonio Conte is perfect for the competition.

Spurs got their Champions League campaign off to a winning start as Richarlison’s second-half brace helped them overcome Marseille on Wednesday.

However, the Lilywhites’ performance until the Ligue 1 side had a man sent off at the start of the second half left a lot to be desired.

The away side dominated possession before the interval and Spurs were unable to get out of their own third but Conte’s men did not concede any major chances, with Marseille being restricted to long-range attempts for the first 45 minutes.

Sherwood believes that despite Tottenham’s struggles in the first half, their counter-attacking approach will make them a dangerous team to face in the Champions League.

The former Spurs head coach insisted that Conte will want to deliver silverware this season, given the squad he has assembled at N17.

The pundit told talkSPORT: “You’ve got a manager who is a serial winner, always wins wherever he goes. He will need to win this year. Daniel Levy’s given him the money very early in the transfer window, which he never does normally.

“He’s earned the right, Conte. Paratici’s helped obviously. Got the players in. He’s improved the players. He’s got a right spirit there. They play with a counter-attacking threat with world-class players at the top end of the field. They’re creating enough chances.

“Conte’s got a knack of making world-class players work hard. Get back in, get behind the ball and counterattack. They play with a system which suits winning the Champions League. They really do.

“I’m not saying they’re going to win it. Of course not. Anything can happen. But if they keep their top players fit. The spine of their side is magnificent and it is efficient.”

I agree with Sherwood that Conte’s style of play is perfectly suited to the Champions League, particularly to knockout games. That is why it is surprising that the Italian’s record in the competition is so poor. That is something that the 53-year-old will be keen to put right this season. 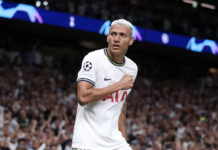