Tottenham Hotspur’s Richarlison had an evening to remember in his World Cup debut for Brazil after scoring a brace to help his side to a 2-0 win against Serbia.

The 25-year-old broke the deadlock shortly after the hour mark when he reacted first from a Vinicius Jr shot to fire home the rebound.  His second effort was something special after he took one touch and twisted his body before unleashing a powerful bicycle kick which left Vanja Milinkovic-Savic grasping thin air as he dived to his right.

(Photo by ANP via Getty Images)

Richarlison joined Spurs from Everton during the summer transfer window for £60million (Sky Sports) and is yet to score in ten Premier League outings for the north Londoners, with his two goals to date coming in a Champions League group stage match against Marseille (transfermarkt).

The striker admitted his hopes of appearing in the World Cup were in doubt when he picked up a calf injury against the Toffees last month which saw him forced off during the second half of the victory (Evening Standard).

Richarlison! What have you done?! 🤯#FIFAWorldCup | @richarlison97 pic.twitter.com/kCKFdlINXq 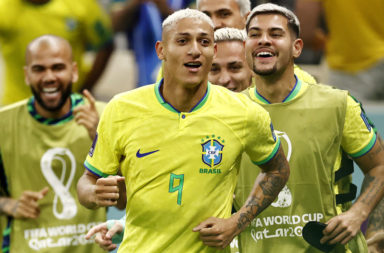