Gabriel Agbonlahor expects Tottenham to be cautious in the transfer market instead of paying over the odds for some of their targets.

Antonio Conte has revealed that he has completed the evaluation of his squad and is waiting for a meeting with the club’s hierarchy to discuss potential incomings and outgoings.

The Spurs boss also made it clear after his side’s 2-0 defeat on Wednesday in the first leg of the Carabao Cup semi-final that there is a gulf in class between the Spurs squad and the likes of Chelsea.

According to reports, the Italian is prioritising signing a right-wing-back and a forward this month.

Some sources have suggested that while Conte will be backed significantly by Spurs, the majority of the club’s spending is likely to be done in the summer rather than in January.

Agbonlahor believes that Tottenham will look for deals that represent decent value for money and will not be pressured into making big-money purchases.

When asked if Spurs need to add to their squad, the former Aston Villa striker told Football Insider: “I think they do. But I’m sure Spurs have never been a team that are going to pay over the odds for players.

“He will have been promised money. Let’s say he’s promised £100million, he’s not going to pay £60million for a player that is worth £30million.

“Conte won’t be bullied into overspending and buying players for more than they are worth. I’m sure he’ll sign players when the time is right.”

We got a clear picture of how Fabio Paratici likes to operate during the summer transfer window. The Spurs managing director seemingly likes to have many irons in the fire and so it is likely that he will negotiate for multiple players in each position before deciding which route to take.

Report: West Ham and Newcastle battling it out for rumoured Spurs target 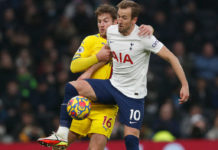 Report: West Ham and Newcastle battling it out for rumoured Spurs...