Paul Robinson has predicted a Brendan Rodgers U-turn this summer if Tottenham actually offer him the vacant head coach position.

Rodgers won the FA Cup with Leicester City at the weekend and looks set to finish in the top four and secure Champions League football, providing they win their final two games.

Meanwhile, Spurs have not won a trophy in over 13 years and the Lilywhites and fighting to make the Europa League next season after missing out on the top four.

It has been reported that Rodgers is not looking to leave the Foxes this summer and has thus been ruled out of the running for the Tottenham job, barring a U-turn.

Despite this current gulf, Robinson argued that Spurs remain a bigger club than Leicester because they are a global superpower.

He added that, no matter what Leicester achieve this season, Rodgers would be tempted to leave it all for Tottenham due to the history, stature and infrastructure at the North London club.

The Tottenham head coach role has been vacant since Daniel Levy and co decided to sack Jose Mourinho in April, although Ryan Mason will serve as interim boss until the end of the season.

Robinson said (Football Insider): “Regardless of the FA Cup or whether Leicester are in the Champions League, I think Rodgers would be tempted to come to Spurs at the end of the season.

“Spurs are a bigger club than Leicester.

“Yes, Leicester have performed better than them this season but the history, the stature, the infrastructure and the finances of Spurs are greater. Tottenham are a massive global superpower.

“Rodgers can sit in his press conferences and say he is not interested but if Spurs come and test the water in the summer I think his answer will be a little bit different. You cannot turn Spurs down for the opportunity that it gives you.”

Video: Ex-Spurs man on whether Dele form can take him to Euros with England 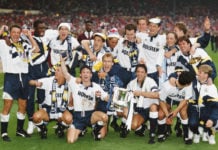 Video: Ex-Spurs man on whether Dele form can take him to...