Home Fan Articles A long trip to Newcastle, but well worth the journey
0
SHARES
ShareTweet

I must start by saying, that my trip leading up to the Newcastle game was hectic. It began on Wednesday afternoon, leaving my home at 2pm to go to N17 and a visit to the new stadium (see the previous article), then to Goodmayes to visit my girlfriend and stay for a few days. Thursday was my birthday (don’t worry, Iwon’tbore you with the details), then on Friday, back home (I live in Berkshire). Did a bit of work there and then left my house at 2pm, to go to Newcastle. It was supposed to be a 5-hour journey, but took 8 hours, roadworks, traffic etc., the usual suspects.

I was planning to book a hotel, but because of the lateness of my arrival – 10 pm – there was no hotel available with proper parking. So I found a housing estate and parked up and slept in the car. Had a very uncomfortable night, back pains etc. But being a Spurs fan, and dedicated, you have to put up with a few uncomfortable moments. My girlfriend did criticise me for staying in the car, something to do with my age and get real.

Morning came, left my overnight stay and found a Waitrose that was open 24 hours and parked in their car park, went to the changing rooms, then to their restaurant, and had breakfast. We are talking about 8.30ish. Got back to my car, put my jeans and jacket on, as it looked like it was going to be cold… it was overcast. I must add here, that around the corner from where I slept in my car there was a hotel that would have been suitable(such as life!). I then made my way to the ground, or I should say, a car park near the ground, parked up, got my parking ticket and walked to the stadium. This took me approximately 15 minutes.

As I got to the stadium, the sun came out and my jeans were suddenly inappropriate (trousers in hot weather makes me feel comfortable). I wish I had kept my shorts on.

Mingled with Spurs and Newcastle supporters and got my programme. A programme is one of the most essential ingredients to the whole affair (I’ve been collecting them for years and have every home game since 1950/51. I also collect handbooks and programmes pre-1950s. Plus I also collect books on Spurs history, players etc., but that is another story). 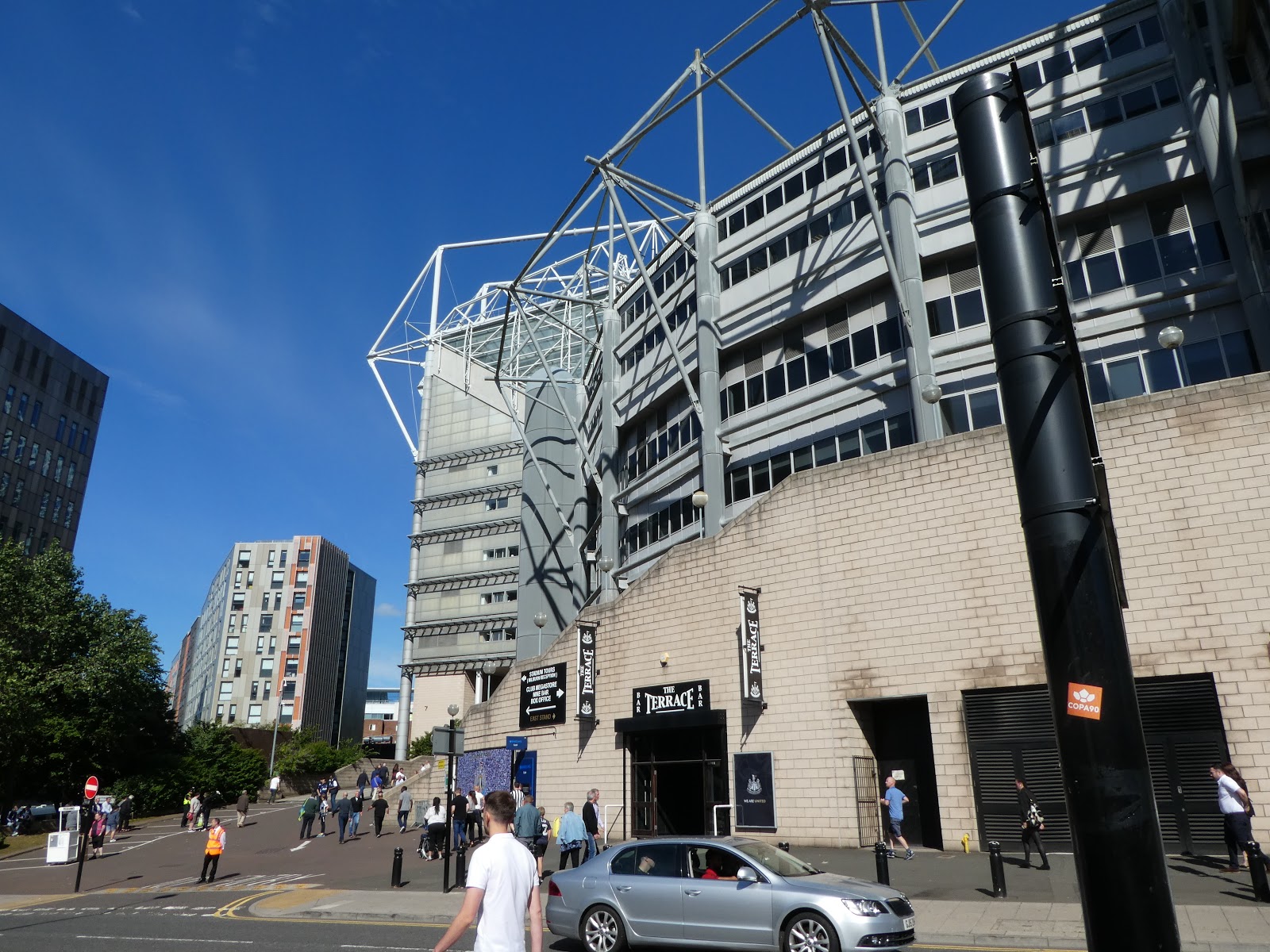 I love going to away matches, so many familiar faces and of course there are the traveling Spurs liaison officers.

I needed to use the toilet and get a drink, so I made my way to the Strawberry pub near the ground. Full of Newcastle supporters, but they didn’t seem to mind a Yid amongst them. Got my half a pint and did the necessaries and then had a stroll around.

I took in the Bobby Robson and Alan Shearer statues and then went further afield. Newcastle is a lovely town and I found the natives very friendly. Anyway, the time was getting on so I made my way back to the stadium.

Actually, on the subject of the stadium, it was impressive, they could do a lot more with it (enthusiasm, filling it to the rafters and lift the roof off with their support, all sadly lacking, but not from us). On this opening day, there were loads of United seats available. When I spoke to their fans, nobody had a kind word to say about their owner, Mike Ashley. He won’t spend the money that is needed, which is ironic because it was announced the day before that he has just bought the House of Fraser for £90 million. I suppose he was getting his priorities right. Ashley is a Londoner and, I believe, a Spurs fan. So, an excellent combination to run a northern team like Newcastle United. I am just glad that we’ve got Levy, rather than Mike Ashley. I always say to those questioning Daniel Levy, be careful what you wish for as you might just get another Ashley.

Got to the body search area, a quick frisk and a look in my bag, no, nothing, other than my perfume and makeup (joke) and went up the many steps until I was with the gods.

Had a hot dogand coke, chatted to friends and then made my way to my seat. All good so far, that is if you count sleeping in your car asan excellentway to start the day off.

My view up in the godsgave me a magnificent picture of the surrounding area. You are looking down on Newcastle city centre, or at least part of it.

As I always do on my trips, I took loads of photos for my Spurs Facebook page, blog etc., and then settled down in my seat, and waited for the match to begin.

While we waited their giant screen showed their victories over Spurs, as we do when the opposing teams come to our home. All psychological stuff to get the home fans in the mood, and to be fair, on this occasion the Newcastle fans needed it. 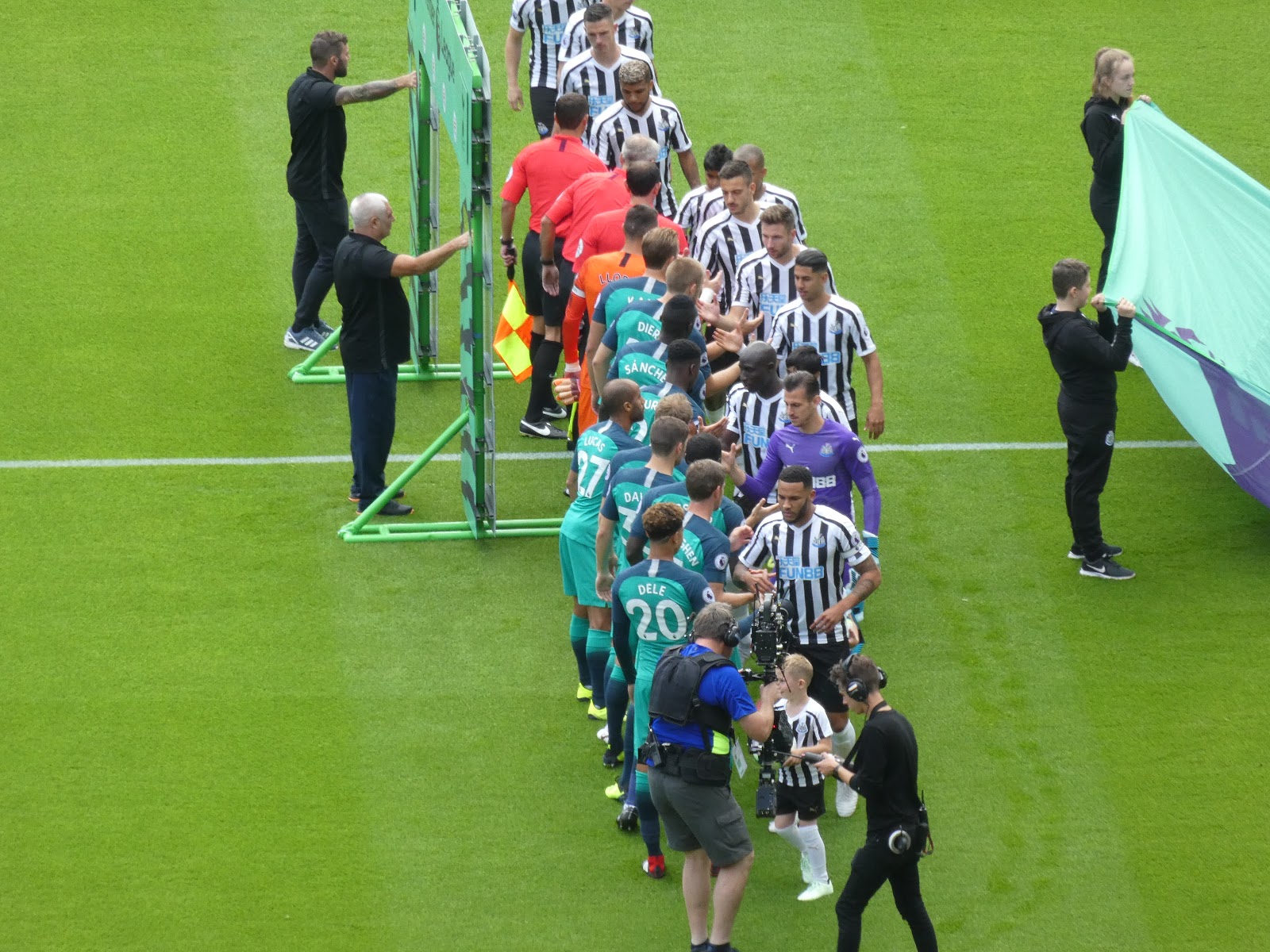 Like all matches we have to go through the ceremony, kissing of players, handshakes even, a quick hug, that is teammates, not the opposing players, but then again… Oh, we mustn’t forget the teams being announced on their giant screen. Who plays what, where and why. Who has been left out or has been put in.

On the subject of their giant screen; you had the match being shown and the time and result, but that was interrupted every few minutes with adverts, so bloody annoying. I just hope that doesn’t come to us at our new stadium.

Then the whistle went, the ball was kicked and we were off. I thought some of our players looked a bit ragged (they had just played in the World Cup), but after 8 minutes we scored. We didn’t know it at first, as we thought the goal had been kept out, but goalline technology saw what others didn’t, it crossed the line. We jumped, we put palm to palm (or high-fives) with our neighbours andwe were ecstatic. Then they quickly got a goal back and  our heads dropped. Typical Spurs, score and then let their guard dropand concede. The name calling started, that was from some of our fans, towards our own side.

It was Newcastle’s Joselu who headed in the equaliser from Matt Ritchie’s superb cross after being left unmarked six yards from goal.

As I said earlier, we fielded several of the World Cup players, including England’s Harry Kane and Dele Alli. Both grew stronger as the game progressed, seemingly shrugging off tiredness. Newcastle energy seemed to dissipate. Alli put us back in front, timing a back-post run to perfection to meet Aurier’s cross with a brilliant header, past Newcastle’s bewildered goalkeeper, Dubravka. We jumped with joy andthe high-fives were flashing everywhere again.

The break came, we got up and made our way to the refreshments. Then back to our seats for the second half.

Newcastle’s new signings Ki Sung-yueng, Fabian Schar, Salomon Rondon and Yoshinori Muto all started as substitutes for Rafael Benitez’s team, who threatened to level for a secondtime after the break, but fell short. Kenedy missed a glorious opportunity with a poor first touch, Mohamed Diame thrashed a shot against the post and Rondon, on as a substitute, hit the crossbar with a deflected shot.

So, we’ve got through our opening match and three points in the bag. The relief on everybody’s faces was quite noticeable. We won, as we did on the opening game last season, and against the same opposition.

There is nothing like walking with other fellow Spurs supporters, as we leave the ground. You can feel the delight in the atmosphere that our victory gave us. 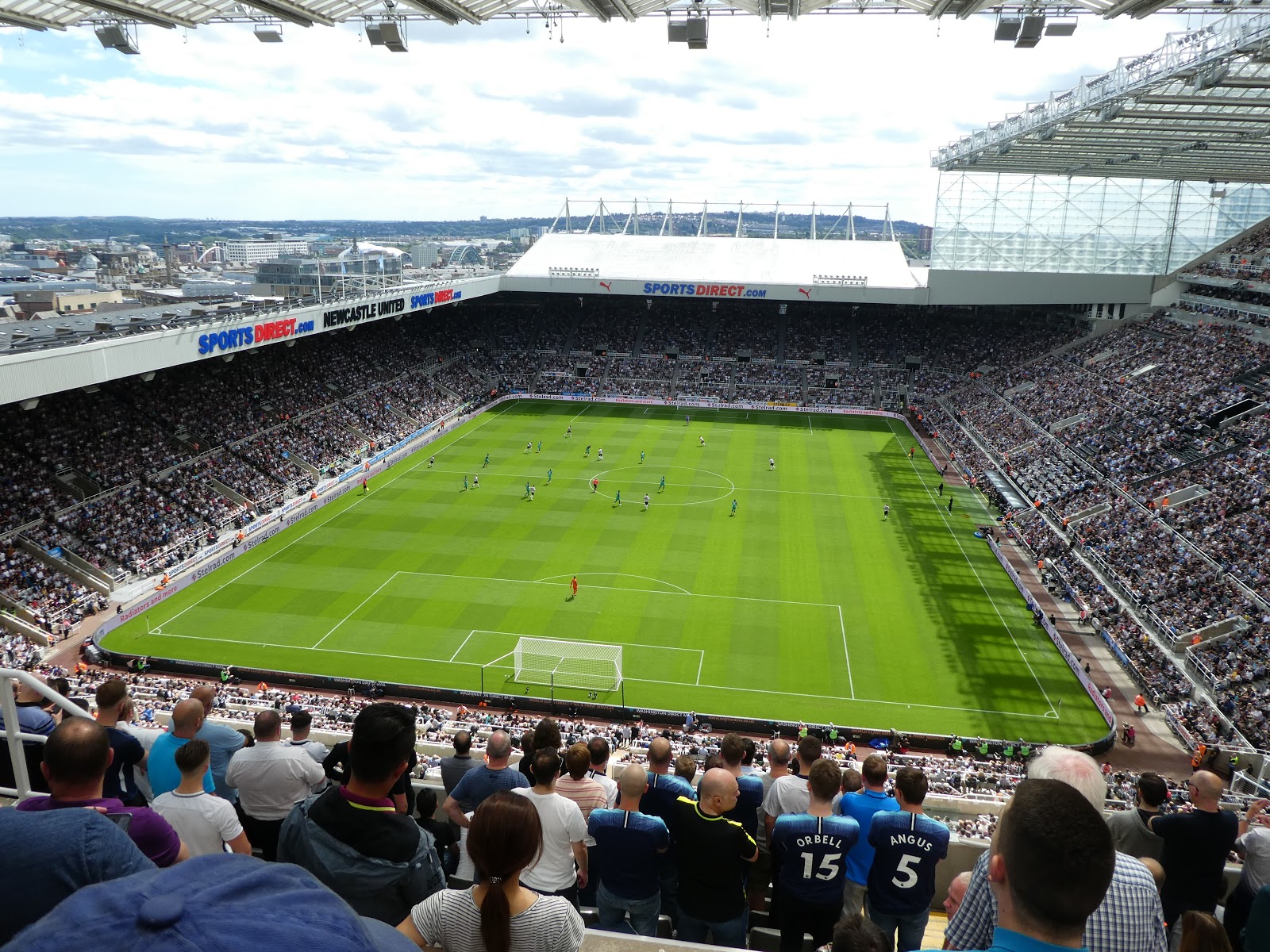 Fellow supporters eventually parted as we made our way to our destination. Then I merged with another set of supporters, this time the home crowd. Their vibes resonated andyou could feel their mood (they seem to accept that they had been herebefore and that the up and coming season won’t be any different to previous seasons). Their heads were trulydown. We’ve all been there before, but we are hopefully on the rise, wherethey are stuck in the Twilight Zone.

As the crowds dwindled and I spotted where my car was parked, I made a detour to the Icecream van for a flake and double cone. Well, I needed something to celebrate with, alcohol was out as I was driving.

Got to my car at about 2.30ish and with a few stops on the way, to keep merefreshed and awake, I made my way to my daughter’s to pick up my dog, and back home at 9pm. A better trip back, than going, I must say.

It was a knackering four days. Slept well on Sunday, but did finally get to go to the gym at 1pm.

That is the trials and tribulations of a Tottenham supporter, but not the end of my journeys.