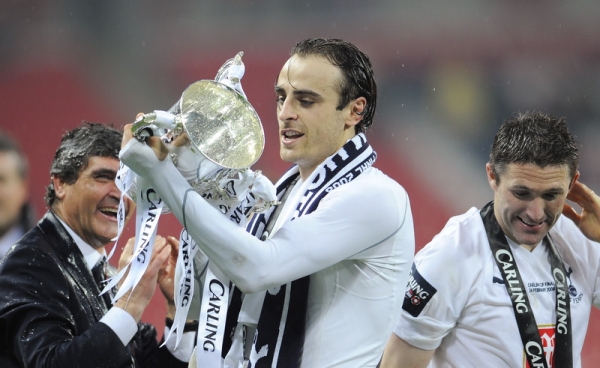 Perhaps the most famous case of Spurs/United players swapping hands, Dimitar Berbatov showed his sheer class and unforgiving skill in both London and Manchester.
Bought for £10.9m from Bayer Leverkusen in 2006 after scoring 91 goals in 201 games for the German side, Dimitar was an instead hit at White Hart Lane.
Berbatov went on to score 23 goals in each of his first two seasons at Spurs, playing only the single game in 2008/09 before forcing through a big move to the Red Devils for over £30m.
Berba was actually a key part of Tottenham's last trophy winning team, scoring an equalising penalty in the League Cup final against Chelsea, a final which Spurs would go on to win 2-1 in extra time.
After struggling to make an impact in his first season at United, scoring only nine league goals, Berbatov eventually lived up to his huge price tag.
In his second season he scored a sensational hat trick against Liverpool, including an outrageous overhead kick. In his third season he won the golden boot, with 20 league goals in 32 games.
Berbatov won two league titles, one league cup, two community shields and a club world cup at United, marking a brilliant Premier League career.
Never famed for his work ethic or miles covered on the pitch, Berba made up for it with his silky touch, crazy tricks and clinical finishing. A class player.

Reports: Contrasting claims on how Ndombele’s wages will be split on loan at Napoli

Reports: Contrasting claims on how Ndombele’s wages will be split on...

Reports: Contrasting claims on how Ndombele’s wages will be split on...