Retro football kits are always top sellers. Fans always love reflecting upon the good old days of their football club and relive these memories by purchasing a retro kit that mimics the original kit.

One of the great things about Tottenham Hotspur is the shirt design. The club have produced some magnificent kits over the years – so in this list, we reflect on the top five home kits that Spurs wore during the 1990s.

We have had some wonderful players who have graced the Lane over the decade in question who have donned our beloved colours. 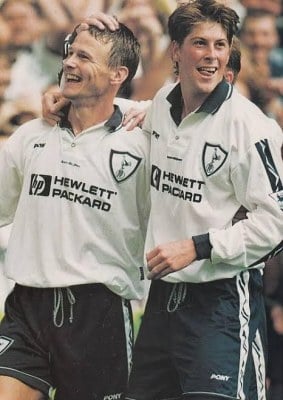 Throughout the 1990s Tottenham often wore the same kits over a two-season stint. The 1995/96 season marked the Club’s first season wearing kits manufactured by Pony. Spurs had worn some unforgettable Umbro kits from 1991 which will be discussed in detail shortly.

But the first Pony kit that was worn until the conclusion of the 1996/97 season was a classic. It was a new era for the Club in terms of shirt sponsors. The club had been sponsored by Holsten since 1983, so the 1995-97 kit was much different in that regard. However, it was replaced by another quality sponsor that blended in well with the kit – Hewlett Packard (HP).

The collar featured a triple button-up design that arguably wasn’t as good as previous years, but regardless looked clean.

The 1995/96 season wasn’t fantastic for the club. Jurgen Klinsmann among a few others had left the club and Spurs opted to sign Chris Armstrong from Crystal Palace – who, despite the criticism, eventually formulated a strong partnership with Teddy Sheringham up front.

Opinion: Why a Tottenham move for Dušan Vlahović should happen in January

Report: Spurs among clubs most strongly opposed to Newcastle takeover

Report: Real Madrid could make move for Spurs star next summer – Not Reguilon

Opinion: Why a Tottenham move for Dušan Vlahović should happen in...

Report: Spurs among clubs most strongly opposed to Newcastle takeover

‘Please take him’ – Some Spurs fans react to La Liga...

Opinion: Why a Tottenham move for Dušan Vlahović should happen in...