The signing of Matt Doherty from Wolves for £15m The Guardian) was likely done to increase the strength of the squad and providing Serge Aurier competition with the aim of enhancing the quality of the starting eleven. Jose Mourinho has rotated between the pair across all three competitions in which Spurs have played to date.

The following is a review of both fullback’s performance in the Premier League using a range of metrics: Offensive, defensive and influence on the team.

NOTE: As a caveat when considering all the below statistics it is important to consider the games in which both have featured in. Aurier has played against all the participants in the top six, where Jose’s side adopt a more pragmatic approach which can appreciate the defensive stats and depreciate the offensive stats.  (This MUST be considered when considering all the stats below). 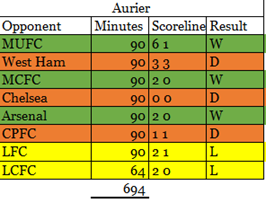 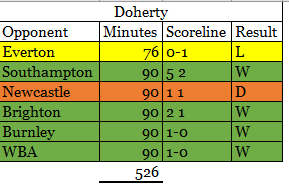 The following section looks at the offensive impact made by both Aurier and Doherty over the course of the season. Focusing on primarily on the quantity and quality of creation. Given the quality of the opponents Doherty has faced, it would be expected that Doherty presents the more impressive stats. This does seem to be the case on surface level with Doherty superior on xa/90, Assists/90, Key passes/90, SCA/90 and GCA/90, however Doherty is ‘winning’ these metrics on small margins suggesting Doherty’s impact thus far has been underwhelming, which is further supported by the Irishman registering just a single assist whilst occupying an advanced right-back position whereas Aurier has registered 1 goal and 1 assist against significantly stronger opponents where Spurs have opted for pragmatism.

From a defensive standpoint, Aurier is a clear front runner. Possessing much superior defensive statistics across the following metrics: Tackles won/90, tackle success rate, interceptions/ 90 and successful pressures/ 90. Again, as noted above, this is due to the contrasting stylistic approaches in which both right-backs have operated in, this is most significantly highlighted by the fact that Doherty attempts 0.86 tackles in the attacking third per 90 minutes while Aurier has attempted 0. FBRef.com

With Spurs’ impressive results so far this season, both Aurier and Doherty could boast healthy points per matches (PPM). Aurier’s PPM is deflated following a run of poor results against Leicester, Liverpool and Palace, whilst Doherty’s influence has led to a PPM of 2.17. What remains a surprise is that Spurs have scored more against the top 6 (i.e., games Aurier has featured in) in contrast to the games played against the non top 6 sides.

Despite initial thoughts that Aurier would be used as a more potent attacking outlet, Mourinho has trusted the Ivorian to compete in the highest quality of games against all the top 6 opponents with the Ivorian responding in a positive manner. On the other hand, Doherty has featured against the more ‘traditional’ sides e.g., Burnley and WBA which makes sense given his aerial strengths. Both full-backs offer contrasting strengths and weaknesses, which is essential in creating a squad which can compete for multiple titles – depth and strength. But what needs to improve is the output going forward, with an obvious reliance on Kane and Son for creation and goals. This is where all of Spurs’ fullbacks can improve going forward.

‘Are you serious?’ – Mourinho has little sympathy for Fulham after fixture change

‘Are you serious?’ – Mourinho has little sympathy for Fulham after...