After arriving in the summer from Southampton, No player has played more (1469) minutes for Spurs than Hojbjerg this season (Fbref.com) and is arguably the driving force behind Spurs’ impressive start to the season which has seen them obtain 25 points from 13 games placing them 3 points behind leaders Liverpool (BBC Sport)

Hojbjerg was dubbed the ‘missing piece’ on his arrival, largely down due to the balance he was expected to provide to this Spurs side. In Mourinho’s first season, this team demonstrated glimpses of what it could achieve, picking up the 4th most points (45) (Whoscored.com) since Mourinho’s arrival in the 19/20 season. But a link was missing between the defense and attack. A defence which needed shielding, with the offence crying out for freedom. Hojbjerg has provided this and much more.

Spurs have the best defensive record in the league having conceded 12 goals in 13 games, keeping 5 clean sheets in the process. Although on the surface 5 cleansheets in 13 games doesn’t sound impressive, considering it took 31 games for Spurs to achieve this feat last season this suggests drastic improvement. (Premier League.com)

Typically, this season Mourinho has opted for a 4-2-3-1 with Hojbjerg and Sissoko playing in a midfield pivot. 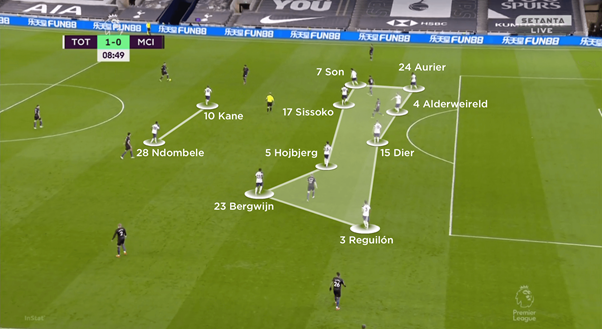 Although the effectiveness of the 4-2-3-1 was questioned previously. Mourinho has altered the structure minimizing almost all its defensive weaknesses. Last season, the major issue with the midfield two was how easy wide creation was for opponents. With two single midfielder’s protecting the centre of pitch and working in tangent, when one midfielder moved out the other midfielder would cover. Leaving lots of open space for oppositions attackers on the opposite side of the pitch forcing both wingers into much deeper positions. 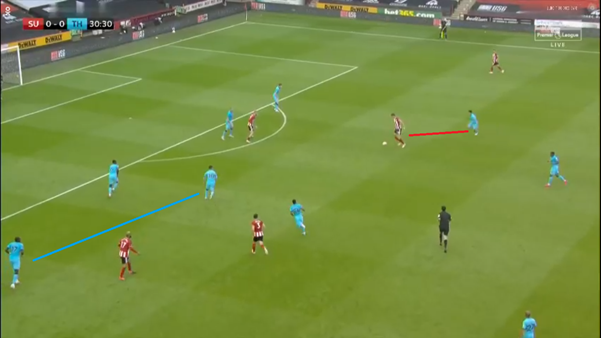 However with the large autonomy in football currently, most offensive structures are set-up for wide creation which almost means preventing the central attacking space is required to a lesser extent. Mourinho’s solved this by instructing his holding midfielders in a low block to opt for slightly wider positions closing any spaces in the wide pockets (See Sissoko and Hojbjerg’s position below)

This structure has resulted in significant defensive improvement particularly in the bigger games. In games against the ‘big 6’ Spurs have conceded just one goal from open play, which was Salah’s deflected goal at Anfield. (Premier League.com)

Whilst the structure has improved, Hojbjerg’s impact shouldn’t go unnoticed.

Demonstrating his individual contribution to Spurs’ defensive success this season.

Impact on the ball:

Whilst his defensive impact is well documented, what goes under the radar is his effectiveness on the ball.

‘Style is simplicity’; although he may not possess the technical ability of an Ndombele. His simplicity is the trigger for many a counterattack and build-up. Hojbjerg possess’ the highest pass accuracy for any Spurs outfield player at 88.2%, whilst completing the 4th most passes in the PL with 779. What is even more impressive is the progression on these passes, Hojbjerg averages 6.15 passes into the final 3rd per 90 minutes only Harry Winks averages more (6.9) in this Spurs squad alongside this the Dane records the most progressive passes for Spurs this season. (FBRef.com)

During first phase build up, (i.e. Spurs look to counter attack) Hojbjerg offers efficiency in his passing, but during sustained waves of attack, Hojbjerg very many acts as the conductor.

During sustained pressure, the midfield two becomes a three.  With Sissoko and Ndombele acting as the outer midfielders with Hojbjerg at the tip. A similar structure was particularly effective against Manchester United, creating a sequence for Aurier’s goal.

This is very much illustrated in the statistic; ‘At Tottenham this season, Hojbjerg has been involved in nine sequences in open play that have led to his side scoring a goal – three more than any other player in the division’ (BBC Football) demonstrating his significant impact on this side

But alongside the above, since his arrival he’s shown much more than statistics can measure. At just 25, he’s very much the coach on the pitch with the squad bearing the fruits of his presence; communication, game management and football intelligence.

He’s the captain without the armband and very much the key driver of any success in the future.

Report: West Ham have been offered £17m star which Paratici and Spurs want

Some fans call for club to engineer Jack Grealish deal with...

Report: West Ham have been offered £17m star which Paratici and...