Warm-up Andrea Bocelli. Get the orchestra ready. Maybe we can have a proper send-off, since we certainly don’t have anything resembling proper football being played by this club anymore. I have been in willful denial about this manager—and this team—for months now. But how sweet thy sound—was blind but now I see. It’s done. We will have the pretence of a trophy hunt until the Toffees—or someone else ends one cup chase, City will easily extinguish the other—and are Wolfsberger better than Brighton? If so we are out of that competition soon as well. Top Four? Laughable. Top Seven? Doubtful. Tenth or eleventh? Entirely possible. This is a poor team, poorly managed, apparently not motivated, lacking answers, ability or both. What more evidence do we want than the last two defeats at our spanking new and sadly empty new stadium

I’ll start with the back. They got better after conceding the inevitable early goal, and the keeper had a fine game to allow us a shout at a result—but we all know the truth. It is a dead-bang average group of players—no special talent anywhere. Dier was dumped so Davies came on to be beaten time and time again, Alderweireld is fading faster than Donald Trump’s social media presence though he saved a goal at the death, Rodon was uninspired, and whatever defensive skill Sissoko supplies is not accompanied by any great skill going forward. It was never going to be a side that could keep Brighton—Brighton!!!—at bay, so this game would be won or lost by our ability to attack.

Which means, of course, that it was lost. Just open your mind’s eye to what we saw—one team running into space, organized, passing quickly, creating chance after chance, fullbacks overlapping and adding to the stress level for the defenders—and the other? Pedestrian. Unimaginative beyond long balls launched to nowhere. Wingers hemmed in with little thought or ability to break free. Midfielders playing ring around the rosey. Occasional 1 v 3 or 1 v 4 efforts by forwards with little else available or in mind. Slow. Weak. Dull. How many good chances were ever created in this game? One key save was forced in the second half, from Vinicius. Son and Lamela tried long shots that went straight to the keeper. All the others were blocked, sent wide or simply gobbled up by the other side. As to the individuals, Bale isn’t, can’t be and will never be even one-tenth of the player we remember. Vinicius is a poor excuse for a striker—Son has no ability or awareness to play Number Nine, Bergwijn at least supplies energy and pace, but there is never a good end result to all that sturm and drang. While Sissoko was in the midfield in the first half, neither he nor Hojgberg produced much of anything, Ndombele was only marginally better.

But the real problem is our system—or the lack thereof. With the exception of Bale and Vinicius, every other midfielder and attacker on the pitch last night have been here for all of Jose Mourinho’s fifteen months. Why is there no understanding of how to produce a goal? Where is the link-up play? The quick movement? The overlapping runs? The incisive passes? The answers to those questions are all the same, and it is a sad truth. Non-existent. Jose doesn’t do any of that, and relies instead on his players’ ability to read a game and react to a situation. Sorry, Jose. With Makelele, Robben, Drogba, Lampard, Hazard and a whole lot of others, that approach might have been successful in the past. This isn’t the past. We are a pathetic attacking squad—and the results prove it. After teams figured out how to defend the Kane-Son counterattack and long ball strategy our attack has disappeared. The players aren’t good enough. The approach isn’t good enough. Leicester are better going forward. Chelsea are better going forward. So now are Arsenal and Aston Villa and don’t get me started about Liverpool or the two Manchester sides. They are in another galaxy. Off of today, even Brighton are better going forward.

This team has peaked—two years or more ago. Major changes are coming, from the manager on down. It won’t be pretty. And it won’t make things better overnight. Europe will be sacrificed. The finances will be nerve-wracking as sell-out crowds are hardly guaranteed once the pandemic allows fans back in the grounds.

Some awful good personnel decisions—the type that characterised the first three or four years of the Pochettino regime—will be necessary or things could get very ugly. Levy took a big gamble with Jose—I’m not upset that he did. But gambles sometimes don’t pay off, however necessary they might have been. This project is just about done. 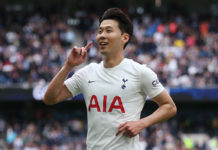 ‘Did you see me before the game?’ – Son reveals his joy at return of Spurs fans

Report: Tottenham have abandoned their pursuit of Dusan Vlahovic

‘I can be completely honest’ – Nuno provides update on Tanguy Ndombele

Report: Tottenham have abandoned their pursuit of Dusan Vlahovic

Nuno reveals if decision has been made on Harry Kane for...

‘I can be completely honest’ – Nuno provides update on Tanguy...